I’ve always been inspired by Italy when it comes to art. Especially those colorful romantic coastal scenes of Amalfi or Capri. So today I am featuring some of my own paintings that are not exact paintings of actual places, but are inspired by Italy.

Sunset on the coast

This is my latest painting. Surprisingly, I made it after I was looking for something for my office and could not find it. Google shows only a selected number of websites and I find it very hard to get outside of their box. So I had no option to be lazy: if I wanted to have that style of painting, the only way was to paint it myself!
This is a fantasy landscape and does not represent an actual place. But I do hope you love the atmosphere. Of course my spiritual cat Knor wanted to be in the painting as well 🙂

This is an adaptation of a vintage painting of an (to me) unknown artist. It has that lovely summer feel with the abundance of flowers …

This next painting is also a recent one and is inspired by Tuscany.
And of course Knor is there as well 🙂

Nothing more inspiring than love. Venice is also known as the city of love, and although there are more places that could be named that, Venice surely fits the bill. This painting is not an exact place in Venice, as I always like to change things around to create a certain atmosphere. And, as oftentimes, the cats have managed to get themselves in the lime light once again 🙂

Think Italy, and the famous wine comes to mind … This painting shows a glass of red with a bottle and grapes overlooking an Italian style landscape painting, framed by an arched window and festive string lights.

A romantic place for a picnic in summer. An Italy inspired landscape scene with poppy fields at sunset with a bottle of wine

A landscape painting above the couch ... add color and style
see details

Romance in the bedroom? Possibly! This painting would look great in any room!
see details

Can’t find what you are looking for?

You may take a look at more paintings in the gallery

I personally find Italy one of the most inspiring places in the world. A stunningly beautiful landscape, lively people, the best kitchen in the world … I am not exaggerating, am I?
Anyway, I was working on a village scene when of course the cat Knor arrived … 🙂 (For those of you who are not familiar with Knor: “k” is pronounced as in “kitchen” and the word knor stands for the inner light spirit of cat beings). She arrived in style: a tuxedo cat. And the lady in red is exploring the street  … as I seem to have developed a specific liking to red dresses. The painting is available on several products and with Zazzle’s new transfer tool (on the product pages) you can also transfer the design to any product that it fits on, as made by Zazzle.
The first product is a wine label with your custom texts: 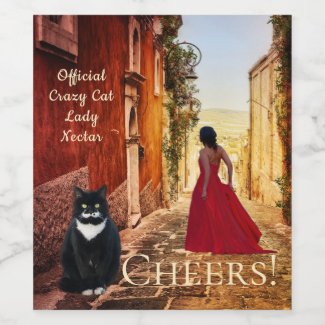 The light shining through this lamp will create a beautiful warm atmosphere: 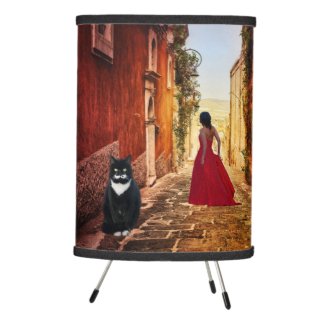 And shopping will be more fun with a colorful and artistic tote bag: 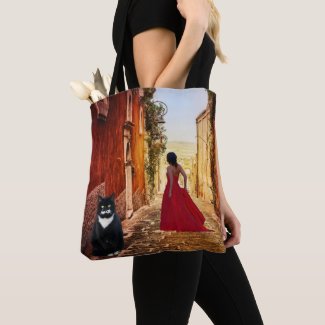 You may also like to take a look at the collection to see more pre-created template products.

Comments Off on #Caturday: tuxedo cat in Italy
Home Styling

Today I’d like to show you three new paintings, all with elegant women center stage. Although they are separate paintings, they do have a connection in that they show the power of women from different angles.
I’m starting with an Italian inspired lady by the beach. Of course her cat Knor (“K” pronounced as in “kitchen”, the word Knor referring to the inner light being and essence of the cat spirit as originating from the star system Sirius), is with her as they are both watching the sunset on the beach. On the left is a Roman pillar, a symbol of the power of the Roman empire, overgrown with elegant flowers. The referral to the Roman times also highlights a certain enlightenment as this period of time is characterized by high technical achievements as well as a huge spiritual and artistic inspiration. The royal blue dress refers to a celestial influence.

The next painting is set in a tropical scene with a lady in red. Red is of course a color of passion. The dreamy waves of the ocean remind of movement and a world that is constantly changing. Together with the cat Knor and a colorful bird friend, she is looking out over the sea to watch the sunset. Or are they waiting for someone or something … ?

And last, but not least, a painting of Norse goddess Freyja, or also named Freya. Although she is originally described as being worshipped in the Scandinavian countries, I saw her clearly in Ireland, which the emerald green dress also symbolizes. She is a blessing for all who see or sense her, being the goddess of joy, beauty, love and healing. The falcon is flying in from the Middle East as an important power animal and she is also joined by her friend and companion the cat Knor, who is silently on the outlook for her. Her love and light are strong against a wild ocean and darkening sky. I depicted her with wings, as she is also related to the angelic realms.

No more pages to load